Even though we are almost a month into meteorological summer, this was our first actual summer weekend. And it was a good one!

Friday was a quiet night which is what we prefer. Saturday ended up being a full day, but it was the best day of the weekend. With young kids, it's best to have lots of plans/things to do - at least for us!

It was Phil's morning to get up with Will, so I slept in until 7. I can't remember the last time that happened - it felt amazing! Once I was up and had breakfast, I took the boys for a walk/scoot to get some of their energy out and to give Phil a break.

After the walk, we headed to the library for a quick visit. They are always rotating out their toys and right now, the featured toy in this play house is... insects! Paul is terrified of them so won't go near them but Will thought they were cool. I am honestly very squeamish when it comes to bugs so I wouldn't choose to cozy up with insects! But different strokes for different folks! 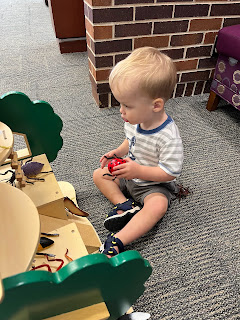 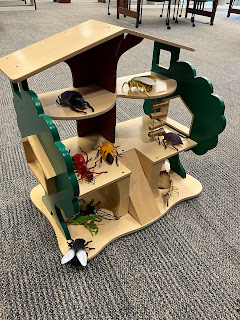 The other toy station was an ice cream shop which Paul really enjoyed. 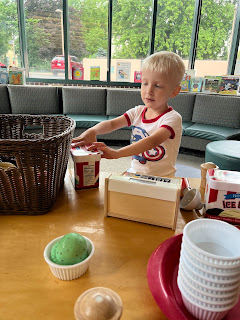 Our next stop was Paul's first gymnastics class! He had a blast! It's a 30-minute class and they rotate them through 4 stations with different things like a trampoline, balance beam, bar, etc. Phil grocery shops on Saturday morning so I had both boys but we need to change things up because Will was kind of a terror! Phil starts grocery shopping around 9 since that is when Aldi opens and he prefers to go there first to get as much from our list as possible - which makes total sense. But we are going to have to play around with the schedule so I don't have to bring Will with to class.
Then it was lunch-time, followed by nap/quiet time. I was excited/hopeful for a long nap from Will since we had done so much that morning. But unfortunately Will had a night terror one hour into his nap. It's uncommon for night terrors to happen during naptime, but Paul also had naptime night terrors. Night terrors are so scary for us as parents because the child appears to be awake, but they aren't. You can tell they don't know who you are and it's very hard to get them to calm down. On Saturday, it took 45 minutes to get Will out of the night terror. I share this experience in case a reader's child goes through the same thing. We didn't know what it was the first time Paul had one and that was especially scary. Paul has outgrown them, I think/hope. Will had one in early January when he was really sick with an ear infection so they can start very early! They tend to happen when a child is overtired or sick, but they can also happen for no reason.
After Will came out of the night terror, we had a snack and then headed over to Phil's coworker's house for a little play date with another family. They have a hot tub that they have turned into a kid's pool for the summer. The boys had fun splashing around. 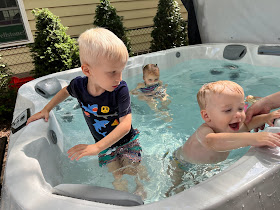 We were all tired at the end of the day on Saturday after our full day!
Sunday was a bit of a quieter day. I got up with Will at 5. Phil took over around 7:30 and gave me a break until I left for swimming lessons with Will around 8:15. We do a lot of swapping of parenting duties on weekends, especially in the morning. It's what works for this stage of life but I don't think it will always be like this. But toddlers are just exhausting!
After swimming lessons with Will, 2 college friends came over and we walked/Paul scooted to the Starbucks that is about a mile away. Us girls enjoyed some beverages and Paul got a donut. It was great to catch up with my friends and hear about how their summers are going so far.
I once again had high expectations for naptime, but they were dashed. Will napped for about 75 minutes which is not enough... but Phil took over Will duty to give me a longer break to read/rest.
And then Paul and Phil headed to Phil's mom - to bring back our cat, Oscar! 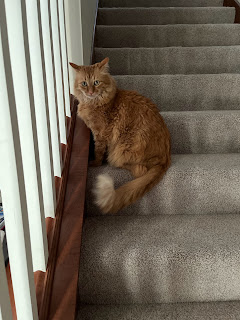 Newer reader may not realize we have a cat, and long-time readers might have forgotten. She is very much a part-time cat for us these days. Once the pandemic hit in March 2020, she has mostly lived with my MIL. She's a widow so really needed the extra companionship from Oscar during the pandemic. And Oscar is just really not a fan of kids. She would never hurt our boys, but she hates loud noises... so being around a toddler who communicates by screaming is not ideal. Oh and yes, Oscar is a girl cat. We were told orange cats are always boys but it turns out that is wrong! But we didn't find out Oscar was a she until we'd settled on the name.
She'll be with us for a week or 2 as my MIL will be out of town part of this week. Even though many cats are ok being on their own and just being checked on, that is not the case with Oscar. When we got our cat, we never envisioned that she'd mostly live with my MIL but it's the way things have played out and best for everybody. We did not have kids when we got Oscar in 2014 so we didn't have to take temperament around kids into consideration. She has always been pretty skittish... she LOVES Phil and just kind of tolerates me. ;)
Keeping this curious kid out of her food and water dish will be interesting. Hopefully he's less excited about her food than he is about the spaghetti he ate on Sunday night. It was definitely a bath-requiring kind of meal! 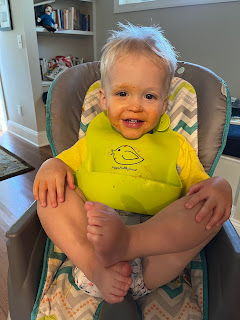 In closing, another positive development from the weekend is that after months of Paul insisting that we sit in the chair in his room until he falls asleep, he now lets us leave and we just have to check on him every 10-20 minutes until he falls asleep. Which is totally doable for us and one thousand times better than sitting in the room until he falls asleep. He was ok with that all 3 nights of the weekend so hopefully this "sticks." I share this because some of these awful sleep stages can feel endless. But they can correct themselves! Now to get Will to sleep past 5-5:30... starting tonight we are taking our pediatricians advice to leave him in his crib until 6am... Hopefully he quickly learns to fall back asleep. He - and we - need more sleep.
How was your weekend?
Lisa from Lisa's Yarns at 10:20 AM