Happy Friday and happy Canada Day to any Canadian readers! We have a 3-day weekend head of us with the 4th of July falling on Monday. The weather is looking awesome so I'm looking forward to the weekend ahead. Here is how our week shaped up!

The book I'm reading is The Violin Conspiracy by Brendan Slocumb, which I am really enjoying. It's about a Black violinist whose priceless Stradivarius violin is stolen. So it's part mystery but more so a coming of age story of a Black man in the predominantly white world of classical music.

The high of my week was going to book club on Wednesday night. We discussed How the Word is Passed which was an amazing book and made for a great discussion. The member who hosted it has a pool, which is a rare thing in Minnesota! It was a gorgeous, warm night so most of us got in the pool after dinner.

The low of my week was working on getting Will to sleep past 6. The first day he woke at 4:45 and cried on and off until 6 when we got him up for the day. It's gotten better since then but he is still waking around 5:30-5:45. Hopefully he learns to sleep longer soon!

A recipe I made was seared ahi tuna with Asian rice. I was hoping to have asparagus with this but it went bad! We skip the sesame seeds and green onions on the tuna and green onions in the rice since it's not worth the effort for fancier presentation. The boys obviously did NOT eat this. We get the tuna from the freezer section at Aldi and it is so good! 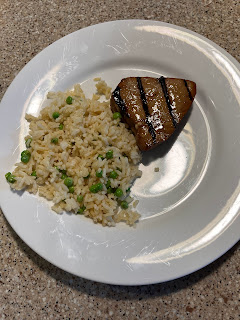 A show I am watching is still Ted Lasso! We only watch one episode/night so we are slowly working our way through this show. That is the only show I am watching these days. This is low tv season for us since we are outside as much as possible!
For workouts I only managed a short run on Thursday morning as I had to take Paul to the dentist Monday morning and was in the office Tues-Wed. Thanks for the perspective others shared on my post on Wednesday. I know I am far too hard on myself! I did a beach body workout this morning and will hopefully run Saturday morning but we'll see how things shape up.
The best money spent was on enrolling Will in a tot/parent gymnastics class at the same time as Paul's Saturday morning gymnastics class! I was trying to figure out what we were going to do with Will during Paul's class as having him with me while we watched Paul did NOT work out last weekend but I also didn't want Phil to have to take him grocery shopping... but then I realized a tot/parent toddler class opened up at the same time! It's only $40/month and will be good for his gross motor development. I mean I wouldn't have sought out a gymnastics class for Will, but having him in a class that is pretty cheap is better than Phil taking him grocery shopping or me trying to corral him during Paul's class.
My plans this weekend include taking the boys to get their first vaccine dose this afternoon!! They will get Moderna and we are very excited about this. I know vaccines are a controversial topic but we trust the science. I asked our pediatrician if we should hold off since they recently had covid and she said to get it as soon as we can since the virus is always mutating and future variants could be worse. Besides that, we plan to go to the zoo as a family on Saturday morning. On Sunday Will has swimming lessons and then we will probably go with Phil for his swim at a local lake if the weather cooperates. That is it for plans, though. We'll be outside lots since the weather looks great! We are missing out on a big family gathering at my parents at the lake but the beginning of the month is Phil's busiest time of the month so we can never take time off around the 4th. But it's kind of nice to stay in Minneapolis as it's quieter since many go to lake cabins.
Bonus photo:
Oscar usually has little to no interest in me but snuggled on me when I was reading after work one day when Phil and boys weren't home yet. 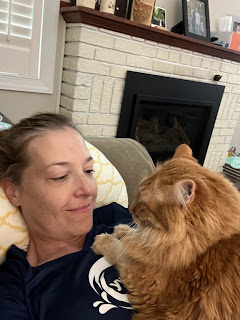 How are you spending the holiday weekend? What are you reading these days?
Lisa from Lisa's Yarns at 2:00 AM